Ethically motivated guidelines were established for the Government Pension Fund Global in 2004 (then named the Government Petroleum Fund) on the basis of the Graver Commission’s report NOU 2003: 22, Management for the Future. The Commission noted that the state should observe two sets of ethical obligations through its holdings in the Fund:

The Graver Commission emphasised that the ethical guidelines needed to be based on ethical norms that are broadly supported in Norwegian society, whilst also reflecting international agreements and initiatives ratified or endorsed by Norway. This would, according to the Commission, ensure that the ethical requirements are based on a solid foundation with an overlapping consensus both nationally and internationally.

The Graver Commission held, at the same time, that the Fund is not suited for attending to all ethical obligations of Norway. A broad range of these obligations are better addressed via other measures than the investment strategy for the Fund. These include, according to the Commission, for example the obligation to relieve suffering and reduce international poverty. The Commission held that such obligations have to do with how we spend the petroleum revenues, and not with how we manage the revenues allocated to the Fund. The Commission stated that it «might be considered unethical in relation to future generations of Norwegians to impose costs on the Fund purely to roll out fairly symbolic ethically motivated measures to shore up a policy which it would be better to advance by other means».

The Graver Commission recommended that the ethical obligations incumbent on the state by virtue of its holdings in the Fund be observed through three sets of measures:

These measures imply, according to the Commission, that one either «bars the Fund from making investments under unethical conditions, or observe the ethical obligations through the exercise of ownership rights where this is compatible with the long-term financial interests of the Fund». The Commission advised against the use of exclusion as a as a means of influencing companies , and held that the exercise of ownership rights would be more effective in terms of influencing company conduct.

The Guidelines for Observation and Exclusion from the Government Pension Fund Global (the ethical guidelines) have evolved over time. In 2008, the Ministry of Finance carried out a comprehensive evaluation of the ethical guidelines. Tobacco was introduced as a new product criterion in the wake of this review. The Ministry also aimed for improved coordination between the measures by, inter alia, requiring the assessment as to whether a company should be excluded to address whether other measures might be more appropriate. Also, the observation of companies was established as a new measure.

From 2015, decision-making authority in observation and exclusion matters was delegated from the Ministry to Norges Bank.1) The purpose was, inter alia, to facilitate good cooperation between the Council on Ethics and Norges Bank, thus making it easier to consider the various measures in relation to each other and use these in an appropriate manner in each case. Under this division of responsibilities, the Council on Ethics assesses and recommends whether companies be excluded or placed under observation, whilst the Executive Board of Norges Bank makes decisions in such cases. As far as the coal criterion is concerned, companies are assessed by Norges Bank. Before the Executive Board makes a decision on the exclusion of a company, the Bank shall assess whether other measures, including the exercise of ownership rights, may be better suited to reducing the risk of continued norm violations.

The requirements applicable to Norges Bank as a responsible investor have since the establishment of the ethical guidelines in 2004 and the comprehensive evaluation in 2008 become more clearly and extensively specified in the management mandate. The Bank has refined its responsible management of the Government Pension Fund Global over time. Environmental, social and corporate governance considerations are integrated into asset management. The Bank reports annually on its responsible investment efforts.

It is important for the ethical guidelines to facilitate principle-based, consistent and predictable interpretation and implementation. The guidelines draw considerable attention, both domestically and internationally. A number of proposals have over time been tabled in the Storting on new criteria and on the implementation of the guidelines. The Graver Commission’s report has served as a key point of reference in the assessment of such proposals.

It is, at the same time, appropriate to review the ethical guidelines anew in view of various developments over the intervening period. The Fund is now much larger than in 2004, the Fund’s ownership stakes have increased and the investments are spread across more countries. Besides, the practices of other funds have changed, international responsible investment standards have evolved and the international community has been confronted with new ethical challenges.

The Commission shall assess whether there is a need for amending the Guidelines for Observation and Exclusion from the Government Pension Fund Global.

The Commission shall base its review on the following premises:

The Commission shall address the following issues in its report:

International conventions and standards have evolved in recent years. These include, inter alia, several new corporate governance guidelines, such as the UN Guiding Principles on Business and Human Rights and various anti-corruption guidelines. The Council on Ethics refers to such recognised principles in its dialogue with companies, and the Bank’s expectation documents are also based on these guidelines. The expectations faced by institutional investors have also evolved. The OECD has, for example, prepared guidance notes on how investors can act responsibly in conformity with the OECD Guidelines for Multinational Enterprises. What the Fund should and should not be invested in has also received considerable public attention in recent years.

In connection with the delegation of decision-making authority for the observation and exclusion of companies from the Ministry of Finance to Norges Bank in 2015, it was emphasised that the Bank should seek to establish «an integrated chain of responsible investment measures». This chain establishes a link between exclusion, observation, exercise of ownership rights and other responsible investment measures. As far as the ethical guidelines are concerned, the practical implication is that one considers whether observation or the exercise of ownership rights should be used instead of the exclusion of a company; see Figure 1.

Figure 1: The ethical framework for the Government Pension Fund Global 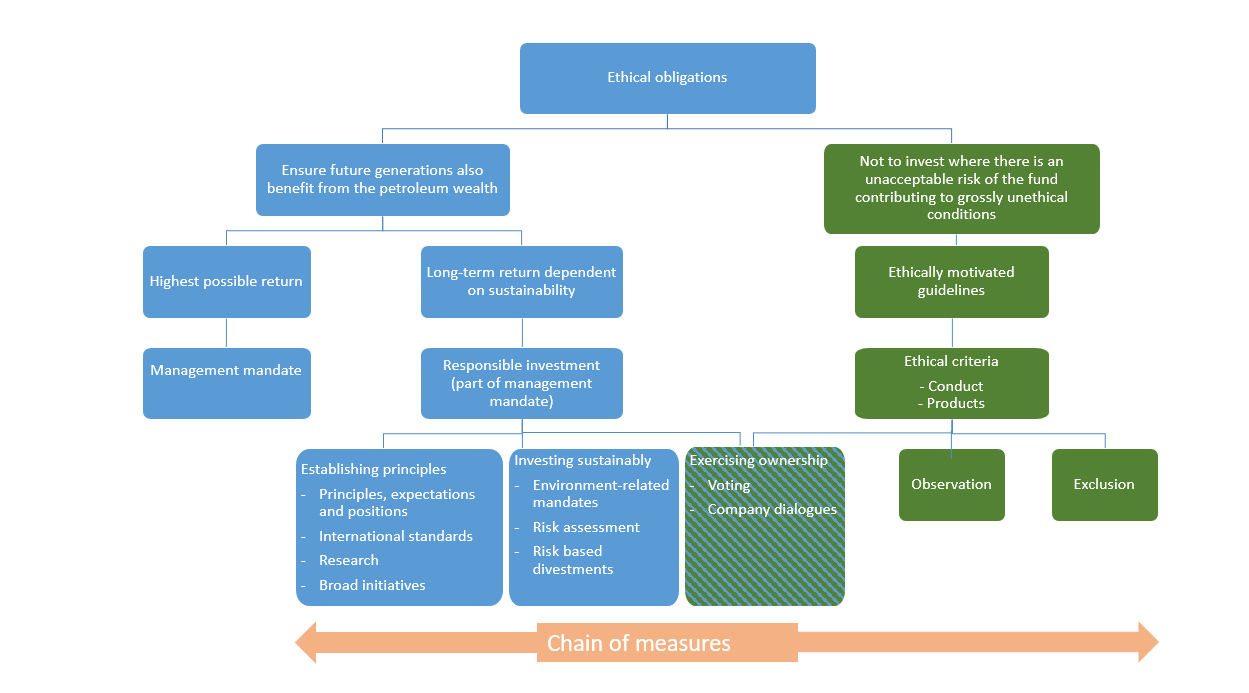 The Guidelines for Observation and Exclusion address companies, and not countries. Discretionary decisions to exclude individual countries might under certain conditions be bordering on foreign policy. Section 3-1, Sub-section 2 c), of the management mandate for the Government Pension Fund Global nonetheless stipulates a so-called «government bond exemption», which implies that the Fund should not be invested in fixed-income instruments issued by states that are subject to UN sanctions or other international initiatives of a particularly large scale, where Norway supports such initiatives. This is considered an objective criterion.

In some countries, the scope of companies for compliance with some of the criteria, especially the human rights criterion, will be limited. These include, inter alia, countries whose national regulatory frameworks and practises are not based on, or are even in conflict with, the fundamental rights laid down in international conventions and standards. This means that companies must in some cases violate the laws of the state in which they have their operations in order to comply with international conventions and standards. The Council on Ethics may in such situations be confronted with the dilemma of either recommending exclusion, and thereby risk this being perceived as criticism of the authorities, or only basing its assessments on factors that can be influenced by a company, thereby not excluding companies that are required to violate fundamental rights under local regulations. The latter may be perceived as legitimising situations that would have resulted in an exclusion recommendation under other circumstances. One issue is how to comply with the requirements laid down in the ethical guidelines without the Fund being perceived as a foreign policy instrument. Another issue is what implications companies’ latitude should have for the assessments under the guidelines.

The Commission shall outline the financial and administrative implications of its proposals.

The Commission shall submit its report by 15 June 2020.

2) Cf., inter alia, letter of 13 November 2018 from the Council on Ethics to the Ministry of Finance.